Secretary of the Austrian Ministry of Finance Mag. Andreas Schieder – 22/11/2012

State Secretary at the Austrian Federal Ministry of Finance 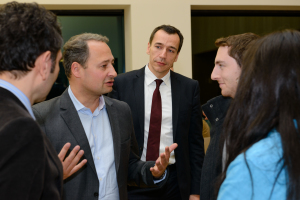 All in all, Mr Schieder drew an optimistic picture of the Economic and Monetary Union and business opportunities therein. He is aware that structural reform beyond mere austerity measures in the crisis-ridden countries but also in the EU as such is indispensable, and therefore expressed his desire for deeper economic and especially political integration in Europe. The latter requires more democratic scrutiny and the ability to translate the tangible consequences for taxpayers to one’s domestic constituency. Mr Schieder, a trained economist, advocated a single supervision mechanism for the banking sector to avoid systemic risk. Moreover, he voiced his concern with respect to blocked debates on Eurobonds (shared responsibility) and dramatically rising youth unemployment in several member-states. In spite of all the problems, Andreas Schieder stressed the advantages of Eurozone. This could be demonstrated, he argued,  by the example of Austria’s previous currency, the Schilling, which would have been destroyed by attacks of speculators, if the country had not joined the Eurozone in the first place.